The January update to The Sackett Family Association website includes the following:
The Settlers of the Beekman Patent, just published online by NEHGS, has much information about Captain Richard Sackett and his stepson Josias Crego (who Weygant had wrongly concluded to have been Captain Richard's son). The book also has more on Nathaniel Sackett, George Washington's spymaster.
Posted by Chris Sackett at 8:26 PM No comments: 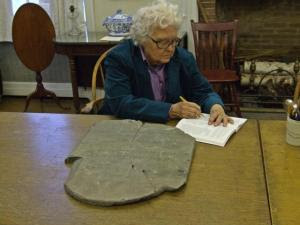 When police in Clinton, Connecticut, found an old gravestone during building work in the basement of their station earlier this month they turned to the Sackett Family Association for help in identifying the cemetery it had come from. The stone was inscribed "In Memory of Ruth Sackett wife of Solomon Sackett who died March 27th 1796 in the 41st year of her age."
Association historian Thurmon King found an entry for the burial in Donald Lines Jacobus' Families of Ancient New Haven, showing that Ruth had been buried in the Old Graveyard in North Haven. The stone is soon to be returned to its proper place.
The story is told in the North Haven Citizen.
(Picture: North Haven Citizen).
Posted by Chris Sackett at 9:39 PM No comments: