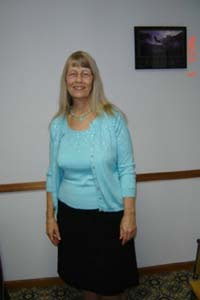 Association founder member Mary Lou Sackett has died, on 20 March 2011, from the recurrence of cancer which she had courageously fought off some seven years ago.
Mary Lou will be remembered with great affection by those Association members who had the privilege of meeting her at the Sackett reunion in Boston in 2006 and again the following year at Fort Wayne, a reunion which she herself organized.
Mary Lou served on the committee of the Association from its formation in 2003 until 2008, becoming vice president in 2007 and taking on the role of acting president in 2008 when president Fred Sackett had to step down for health reasons. She had been an active Sackett family researcher from a young age, particularly of her Vermont line, and was a member of the Sackett mailing list from its beginnings in 1997.
Posted by Chris Sackett at 8:16 AM