The Sackett Family Association website sackettfamily.info has been updated with the following new and revised pages:

The search forms may take a few moments to load the first time they are used. Once loaded, the search is fast, and it allows various search parameters, such as the ability to search for people based on the names of spouses or parents. There is a choice of search methods: Basic and Regular Expressions—see the Help item ["?"] on the form for an explanation.
Posted by Chris Sackett at 11:38 AM No comments: 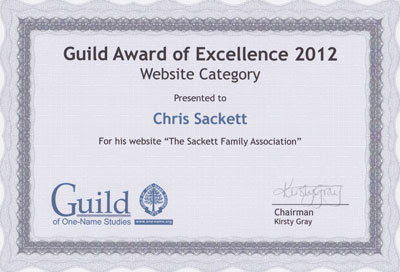 The Sackett Family Association website has received the Guild of One-Name Studies Award of Excellence 2012.
Posted by Chris Sackett at 9:33 PM No comments:

In Sackett Footsteps - The 2012 Sackett Reunion in Westfield, MA

In 2010 at the reunion in Portland, Oregon, it was decided that the next reunion would be held in Westfield, MA, since one of its first settlers was John Sackett, who was the son of Simon Sackett who settled Cambridge (Newtown) MA. (Sackett Reunion 2006).

There is a great deal of Sackett history in and around Westfield – in some of the neighboring towns such as Southwick, MA, Springfield (settled by Simon’s son Simon, Jr.) and Northampton, MA. From Weygant we learned that John became a resident of Springfield, MA, in 1653. In 1659 he married Abigail Hannum who was from Windsor Connecticut (her father William Hannum is listed as one of the first settlers of Windsor, CT, which is the next town over from Hartford) and lived there a short time until he moved about 15 miles away to Northampton, MA. In 1665, the family moved yet again, this time to Westfield. It seems he moved to Westfield when it became a permanent settlement. King Philip's Indian War occurred in 1675 and John’s house and barn were both destroyed by Indians. You can read about this in Weygant, page 17. John lived in Westfield until he died in 1719. Abigail Sackett’s grave is one of the oldest ones in the “Old Burying Ground” which is on the register of historic places and is in Westfield. We believe that John is buried next to her, but his headstone is gone. There is a large Sackett section in the Old Burying Ground and that is one of the places that we will be touring during our reunion.

The area surrounding Westfield is full of Sackett history and we have an extensive agenda set up to visit the Westfield sites, but there are so many cemeteries, historical sites, museums, and libraries – so much history that you might wish to extend your stay to visit them. Also, Debbie and Steve Barbee would like to invite you to extend your reunion adventure to include Sunday Church Service in Warren, CT, the day after our reunion. John Sackett’s son, William Sackett's line is of interest as his son, Jonathan eventually ended up in Warren, CT. He and his family donated land for a church to be built there. The church, which Debbie and Steve attend, The Warren Congregational Church, is located on Sackett Hill Road. The Cemetery where Jonathan and others of his family are buried is just down the road. A large stone which commemorates the Sackett family is also located there. A drive from the hotel in Westfield would take about 1½ hours. The congregation would love to welcome any of the Sackett family.

We hope that you can join us for the reunion and can follow "In Sackett Footsteps" with us. We look forward to reconnecting with and meeting new “cousins”.

Sergeant John W Sackett's WWII dog-tag, found by Kelly Grace at an old U.S. army base near Brisbane, Australia, has been reunited with John's family in Michigan.

Kelly wrote to Sackett Family Association historian Thurmon King who posted her message on the Sackett mailing list. Within hours, Association member Sue Sackett had identified the tag as belonging to her late husband's uncle, who she knew had lived in Adrian, Michigan, during the war.

The tag, now a much-treasured reminder of their late father, is in the possession of John Sackett's daughters, Mary Hammond, Pam Thacker, and Kathy Rollison.

The full story and pictures appear in the Toledo Blade.