The Sackett Family Association website sackettfamily.info has been updated with the following new and revised pages:

Posted by Chris Sackett at 10:41 PM No comments: 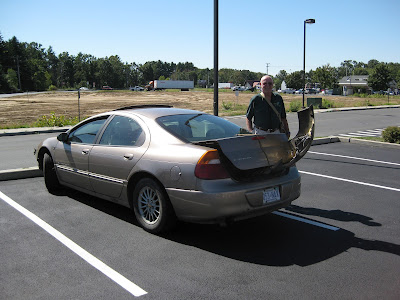 An early arrival at the Westfield 2012 Sackett reunion was Mike Sackett, seen here after bravely fighting off unseen attackers on the highway.

Despite losing a large part of the front of his car in the attack, the quick-thinking Sackett, determined to miss none of the reunion's exciting events, tore off the damaged front with his bare hands, stuffed it in the trunk, and completed his journey undaunted and on time.
Posted by Chris Sackett at 11:13 PM No comments:

The following Association members have so far indicated that they are planning to attend the 2012 Sackett reunion in Westfield (Bold = registered):

Reunion convenors Debbie Barbee and Sharon Powalka announce a packed and entertaining program of events for the Sackett Family Reunion to be held in Westfield, Massachusetts, in September. There will be talks, tours, much Sackett history, and visiting with cousins and Sackett researchers.

Sackett reunions just keep getting better—and this one promises to be the best yet!


Leave a Comment to add your name or travel plans.