RootsWeb mailing lists are back online. Subscribers to the Sackett list may again send and will receive email messages. The address is as before: sackett@rootsweb.com.
Some changes to the RootsWeb website have been made. The new Sackett pages are found here:
The web address for these items shown in the footer of list emails is an old, now defunct, address. Correction of the footer information awaits further development of the RootsWeb system.
The archives and associated information pages are public, and subscribers to the Sackett list do not need a RootsWeb password to view them. However, subscribers to multiple RootsWeb lists may find it convenient to manage their subscriptions by creating a login password at http://home.rootsweb.ancestry.com/listindexes/setupmail.
The Sackett list owners are Terri Carlson and Chris Sackett. They will help with mailing list issues sent to sackett-owner@rootsweb.com.
Posted by Chris Sackett at 11:51 AM No comments: 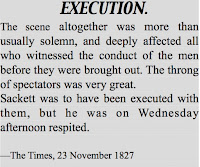 On 13 September 1827, at London’s central criminal court, the Old Bailey, Thomas Baker Sackett was found guilty of assaulting and robbing a bank clerk. His sentence for this crime was death by hanging. His execution was set to take place two months later on 22 November at the notorious Newgate Gaol.
There being no right of appeal, Thomas’s only hope was to petition the King, George IV, for his royal mercy. Following frantic efforts by a number of concerned worthies who petitioned on his behalf, he was at last granted a respite—but then only at the second attempt and with only hours to go before his appointment with the hangman. His sentence was reduced to transportation for life to the convict colony of New South Wales.
Thomas Baker Sackett (1796–1837) was born in Essex to calves salesman Thomas Sackett and his wife Rachel Baker. With a substantial inheritance from his grandfather, the younger Thomas took a farm near Billericay, but the venture failed. He returned to his former trade, setting up shop as a butcher in London's Whitechapel district. Later the same year, his wife died aged 26. His butcher shop also failed.
Thomas survived the harsh conditions in the penal colony of New South Wales for nine years, and died there aged 41 in 1837. 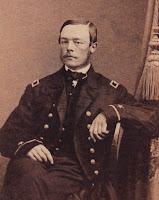 Augustine Sackett (1841–1914), born in Connecticut and later of New York City, son of Homer and Flora (Skiff) Sackett, was the inventor of drywall (known in the UK as plaster board), which he patented in 1894 as Sackett Board. It is used today to clad walls and ceilings in virtually all new buildings.
In recognition of his invention as a major technological advance, Augustine was inducted in 2017 into the (United States) National Inventors Hall of Fame, the citation recognizing that few modern products have transformed construction as much as drywall.
Augustine served during the American Civil War as an assistant engineer in the Union Navy.
After the war he became a paper collar manufacturer. His subsequent development of paper-clad panels of gypsum proved a more enduring venture, although he probably did not realize just how essential a product it was to become. He described himself rather modestly in the 1900 census as a paper manufacturer, and in 1910 as a manufacturer of linings.
Sales of drywall are now in excess of $3 billion annually.

More… Augustine Sackett at sackettfamily.info
Posted by Chris Sackett at 11:56 AM No comments: